Start by just being yourself.

As part of an internal campaign, EverBank identified employees throughout the company who are seen as Difference Makers. Our board member, Jason Hamilton, was among those chosen. Jason has been working at EverBank, now part of TIAA, in Mail Operations since 2001. Below is Jason’s Difference Maker feature article.

With support from people like Jason, you can’t lose

When I asked Jason Hamilton the best thing about working for EverBank for the last 17 years, his answer, My paycheck! made me laugh. But, he wasn’t pulling my leg. The truth, according to Joseph LeCates, VP/Facilities Director, is that Jason is just one of a few people in all of Jacksonville, Florida who have a full-time job with benefits and special needs. Jason has Down syndrome.

You might think this would hold Jason back, but he says, “What I have is a gift from God”, and he doesn’t intend to squander it. Jason’s bright, enthusiastic personality has won him hundreds of friends and the respect and affection of his EverBank co-workers. We all love him here. He’s a fantastic person, just a phenomenal man, LeCates said, going on to explain that Jason’s a technological whiz with so much to offer.

Jason’s work extends far beyond EverBank’s walls?in fact, he’s an active, vocal champion of the special needs community and serves as a Self Advocate on the Board of Directors for The Arc Jacksonville an organization that helps people with intellectual and developmental challenges. Jason gives a speech at their annual fundraising dinner and is known for challenging the audience to Show me the money! by matching or beating his own donation to the cause.

Jason takes his advocacy on the road as a Self Advocate board member for the National Down Syndrome Society, too. Annually, he travels to Washington, D.C. to speak with Congress about challenges faced by people living with disabilities. For example, limitations exist on how much money a disabled person can have in a bank account before their Supplemental Social Security benefits are affected something Jason would like to see changed.

In addition to fundraising and increasing awareness, Jason is living proof of just how employable people with disabilities can be. He hopes his own career serves as an example to motivate companies to create more jobs like EverBank has that are inclusive of the special needs community. ?If people can work and want to work, they deserve opportunities.?

There’s one other thing Jason feels as passionately about: the Jacksonville Jaguars. Each week, Jason a season ticket holder and his family go to the team’s post-game broadcast held at the local Mellow Mushroom restaurant. As the Jaguar’s most dedicated fan, Jason was given two tickets to Superbowl LII! Calais Campbell, a defensive end for the Jaguars, treated Jason and his sister to their airfare and accommodations for the trip out to Minnesota and they even got some field time on game day!

When I asked Jason what he suggests for someone who’d like to make an impact in the world, he said, Start by just being yourself.? Now that’s some winning advice. 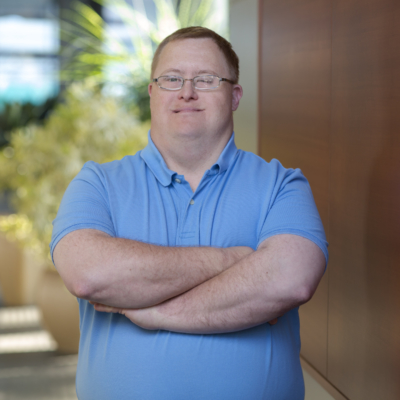